How Do You Say “Blueberry”?

Imagine: It’s a bright Saturday morning, the birds chirp outside as if auguring the beginning of Spring, and our happy little bilingual family is placidly gathered at the large, dark wooden dinning room table to eat breakfast. 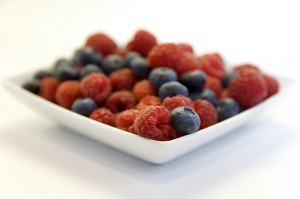 I enthusiastically begin to mix blueberries into my son’s yogurt and as the purple swirls form patters against the white background,  I describe in Spanish each of my actions to my little boy but I stumble when I get to the part where I say: “…look at the purple juice coming out of the………[how the heck do you say blueberry in Spanish??…]…hmmm….FRUITs!”

How sad is that?

My wife laughs and my son is left with an irreparable gap in what could have otherwise been an instructive experience.

What’s the point of all this? The point is that making the decision to raise a bilingual child has done something interesting to my Spanish:

1. It has forced me to recall many words and expressions that I haven’t used in years and some that I had almost forgotten

2. It has made me realize the gaps I have in my own native tongue

Number 1 can be explained by the fact that I’ve been here for twelve years and I speak English for the majority of my day. Number 2 is a bit more complicated.

What kind of dimwit wouldn’t  know how to say “blueberry” in Spanish? I don’t know. The more romantic and literarily embellished justification is that I grew up poor and blueberries are probably rare and expensive in Colombia so we never had them at home. Just like we never ate strawberries and other wildly exotic fruits. In general, it’s just a challenging problem of exposure and cultural relevance.

What? Let me explain:

– I already mentioned I never ate blueberries in the old country. So I went and looked up the word in the dictionary and the Spanish word for blueberry is “arándano”, which is a word I remember hearing before but have never, ever used in a sentence. If I were to guess what an “arándano” is, I would have said it’s probably a filthy, lazy person. But no, it’s a blueberry, so now I know.

– Car seats, booster seats: how the heck do you say these things in Spanish?  I arrived in this country at the tender age of twenty. Before that, I rarely rode in a private car (I mostly hung from the doors of a crowded bus to get from point A to point B), so my family never sat around the dining room table pondering the benefits of space-age straps on our car seats or booster seats. I imagine when I was a baby I either sat on someone’s lap to eat or at best, my mother rolled up a pillow or a blanket to prop up my behind such that my young fingers could reach for food placed on the table. So for now and until I talk to someone in Colombia who uses these things, my son and I refer to his booster seat as a “silla”….a “chair”. Kind of a disservice to the boy, but I’ll try to do better.

So clearly, my boy and my wife are not the only ones learning Spanish in the house. For the foreseeable future, every time I think of a blueberry, I’ll first think of a filthy, lazy person, and then about the fruit. And I’ll look into getting a Spanish dictionary application for the iPhone.