I used to call my boy “Gordito”, which in Spanish means “Little Fatty”. It wasn’t an underhanded homage to his healthy roundness, chubby cheeks, double-chin, and thighs (which as far as I’m concerned are desirable in a baby). It was simply an endearing nickname I gave him out of love and based on tradition (it would be a very common thing to call a child in Colombia, even if they’re not chubby). 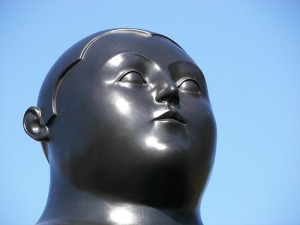 My Colombian friends wouldn’t even bat an eye when I used the appellative in front of them, but in front of an “Anglo” audience, I would almost invariable be asked what the name meant and they would react to the answer with awkward giggles. For a long time, I forced myself to remain firm and defend the name, because it’s cute, meaningful, and in the context of the language and the culture, the sounds of the consonants and the vowels in the word have a certain affectionate musicality to them. But I finally caved and gave it up.

For a couple of reasons:

-I grew tired of the giggles

– I may be overreacting, but a person’s weight in American culture is a more taboo subject than it is in Colombia. Just the other day, my pregnant wife and I were video-chatting with my family in Colombia and my sister (who happens to be pretty “gordita” herself) told my wife that she looked “huuuuuge”, but she intended it as a compliment–my wife’s “hugeness” was seen as a testament of a healthy pregnancy. But I digress. In the case that my boy does turn out to be rather portly, the last thing I want is to draw attention to that fact with a nickname

But being the neurotic overthinker that I am, I have wondered how many more aspects of my “old” culture  I’ll have to adapt (or suppress) in order to comply with American social norms for the sake of my children. I probably sound like a pushover who’s unwilling to fight for traditions that might enrich the character of my children, but parents by nature do so many embarrassing things that I rather not add to that fate by making my children have to explain why their mean daddy is calling them fatsos. I’ll pick my battles and just fight the good ones…and we’ll see what trait I’ll be teasing my next child about.