Trying to raise a bilingual child brings to the surface the many semantic subtleties of language. 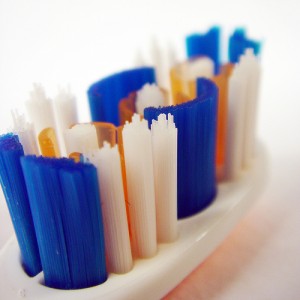 Yesterday, my boy was excitedly going about his routine of taking as many toys as he could out of their assigned places in his play area, which he does especially diligently when he comes back from daycare because he still likes us and is happy to be home.

In the middle of creating this little “toynado” (to borrow a term from a co-worker of mine), he stumbled upon a hairbrush that either I or his mother had absentmindedly left there. With a serious look on his face, he held the hairbrush up for me to see, and because he knows I’m a trained monkey and will react to every stimuli coming from him, I earnestly informed him:

The boy’s face lit up with understanding and he proceeded to jam the large hairbrush in his mouth. Talk about Gross Domestic Product!

In Spanish (at least in Colombia), we use one simple word (“cepillo”) to refer to any kind of brush — hairbrush, toothbrush, brush to scrub foul toilets, brush to comb the hair of mangy dogs or valuable stallions. Of course, for the sake of specificity, one could say “cepillo de dientes” (brush for teeth), but c’mon! Who has time for that?

So the only context in which my very unfortunate boy has heard the word “cepillo” is during our nightly wrestling match when I threaten to strap him down to the bathroom floor if he won’t let me brush his teeth. And therefore he thinks that any “cepillo”, no matter its intended purpose or its size, is to be used in his little, partially toothless mouth.

So now, I’ve learned a lesson that will prepare me for other subtlies of cross-language upbringing. I’ll have to explain to him why in Spanish the term for “toes” is “finger of the feet” and why, unlike in English, we have a very short and punchy word for “stinky feet”….”pecueca”. And come to think of it, why there seem to be so many nuances to the subject of feet.