Every car you see on the road is like a small, semi-private universe where people’s lives unfold, in motion. Some times that universe is not so small (if you drive a 25 ft tall SUV to haul firewood from the sequoias growing in your backyard) and some times not so private (if you’re someone who likes your radio’s bass cranked all the way to 11 and then need to roll down the windows so they don’t shatter in your face after your head explodes), but most Americans spend so much time in their cars that this Colombian-American feels obliged to make the most out of the experience. 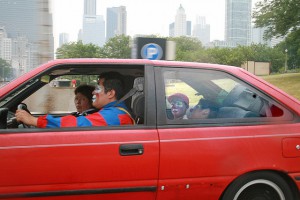 Now that I’ve changed my work schedule so I can leave work earlier, beat traffic, and pick up my kids before they undergo one of their sporadic five o’clock meltdowns, we can actually talk on the way home (instead of competing for who can whine loudest and drawn out everybody else’s cries with their own.)

Those daily car rides have become precious to me. I have two boys strapped to their seats and under the drowsing spell of a moving landscape. In other words: a captive audience.

So we do a lot of chatting in the car–the usual how was your day, what did you do, and so on. And not that I don’t love the company of my beautiful bride and mother of my children, but not having her in the car makes my vehicle a nice, motorized “Spanish-only” zone (somewhere in Arizona, a sherif or a lawmaker is getting their heart broken.)

We get into some pretty intense discussion about everything ranging from the Batman toy some kid brought to daycare to deep existential questions about the very nature of reality. The latter is something every parent is familiar with:

Like any parent, some days I have less patience or energy for the endless back and forth, but I remind myself that every minute my kids are engaged with me in conversation (Spanish conversation no less,) is precious. The day will likely come when they don’t feel like talking to me, when they don’t feel like speaking Spanish any more, or when all their questions about the connection between lawns and human desires are answered, so I’ll suck it up and talk to them as much and as meaningfully as I can.

And for those days when my brain is fried, we have music!

(Latin) Music has been another fantastic tool to liven our rides and introduce many new words and topics of conversation. But music too can be a double-edged sword, especially if you’re like me and you find most “children’s music” unbearable. So while it is great to have reached a point where my son Gabriel has his favorite tunes and asks me to play them for him as soon as he gets in the car, it can also be tough when he starts dissecting the lyrics.

One of his favorite songs, “Jardín Encantado” has a line that says: “Voy a pelear por nuestro pan de cada día” (“I will fight for our daily bread”)

“Uh, nené, he is saying ‘fight’ but what he’s trying to say is that he’ll work really really hard”

(the boy may be telling himself: “hm, I don’t understand figurative language yet, so next time I fight with one of my friends, I’ll tell papá I’m just working really hard…”)

“Papá, why is his heart crushed?”

“Uh, nené, because the woman he likes doesn’t like him”

“Uh…[in my mind: maybe she is mean and superficial and doesn’t like him because he’s short and poor like papá was years ago when he had to endure the indifference of stupid, stuck-up chicks who didn’t realize how good he was..] “

Apologies, audience. But that was cathartic.

Anywho, commonsense conclusion here — any parent raising bilingual children will be well-advised to prepare and develop the mental endurance for as much chatter as they can possibly muster. The beauty of this necessity is that it builds language skills but at the same time, and more than anything, it builds closeness. Just be more careful than I have been and screen your lyrics, or be prepared to tackle some thorny topics.