My 18-month old son goes to a Spanish-speaking daycare four days a week. The exposure to the language he gets there, combined with the fact that I speak to him exclusively in Spanish, makes Spanish his primary language at the moment (to the extent that an 18-month old can have a primary language). 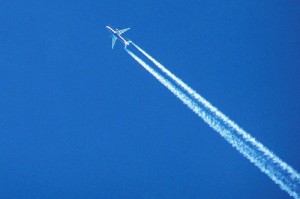 Photo by The Shane H

So out of the only-Jesus-knows-how-many words he can say and understand, I would estimate 90% of them are Spanish words (most words he understands in both Spanish and English).

But it’s really curious to me why, Spanish being his predominant language, there are words he will only say in English. “Airplane” is one of those words. When he hears an airplane flying overhead, he opens his beautiful brown eyes very wide, purses his lips, and excitedly exclaims: “Eh-plame!”

So at first, I was excited that he was saying a word I hadn’t heard before. I assumed his mother had tought him its meaning and how to say it and I was happy to find the word as evidence that he was in fact acquiring language from the both of us. But then, I tried to teach him the equivalent of the word in Spanish. “Avión, avión, avión, AVIÓN!!!” I would try to drill into the poor guy’s head, expecting that he’ll use the Spanish word with me and the English word with his mother, to no avail. “Eh-plame” was the word and has been for the last few weeks and there is not a darn thing I can do about it. And that’s fine. But natually, this phenomenon puzzles me and as I let my boy develop his language skills in a natural, organic way, I wonder how those decisions are made by his young brain. Just like “airplane”, there are a few other words he will only say in English: “ball” (his first official word), “bus”, “more”, etc. All I can do is nod my head in understanding, repeat the equivalent word in Spanish, and smile proudly at my strangely billingual little boy.