So I spoke too soon and I need to come to terms with the fact that I’m now somebody’s “old man”, so I can expect going forward to be amazed at the brain abilities that this generation I’m ushering in is developing at the same rate that I’m losing them. 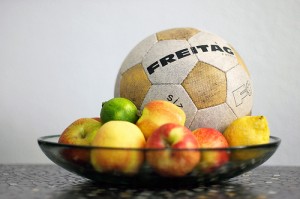 Almost as soon as I got done talking about how I need to let my boy pick whatever darn language he chooses to express any given word, he one day comes home pointing at his play area and showing me his “pelota” (ball). “Ball” was his very first word, so it stands to reason (*my* reason) that it would be the most deeply ingrained in his gray matter and neurological circuits, but for whatever reason, he is now able to refer to a ball as pelota for papá and as ball for those unfortunate souls who don’t happen to be papá.