A few years ago, I was acquainted with a couple from Mexico who were raising their two boys (ages roughly 4 and 6) in the United States. The couple didn’t speak much English and they naturally only spoke Spanish in the home. Furthermore, the children didn’t have (as far as I knew) any English-speaking buddies and were rarely around adults who spoke English. But they had something much more precious to the young, (and dare I say, male) mind: Television! 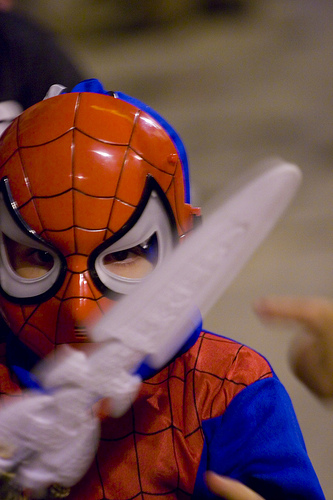 These two boys were hardcore fans of Spiderman (the cartoon version) and watched it on television any chance they got. Their parents didn’t impose any restrictions on their TV-watching, so over time, the young boys with their little spongy brains absorbed so many lines of English dialog from the Spiderman cartoons, that they began to develop their own pseudo-English language, made up of what sounded like permutations of lines from the show. You could see the two boys running around, chasing each other, and reciting in perfect English things like: “You will never get away with this, Electro!” or “This is the end of the road for you, Peter Parker!”

Now, I’m not in any way advocating television as a tool for language acquisition. In fact, as parents, my wife and I have committed to keeping our boys away from the tube almost entirely until they’re two years old, and to establishing a habit of watching very little television in general. However, as a speaker of English as a second language, I was utterly fascinated by these two super hero boys and how their language system worked for them, even outside the realm of play. It seemed like they were actually learning English from television alone! And that resonated with me because when I was younger, before I enrolled in formal English courses, I learned most of my English from watching Beavis and Butt-Head and The Real World on MTV, and from learning the lyrics to songs by Guns N’ Roses, Metallica, Led Zeppelin, Black Sabbath, and Aerosmith. Of course, this was not the same as true early language acquisition from the television, but I felt like I could relate to the boys’ excitement about the content and the almost accidental language implications. In my case, Beavis and Butt-Head were so bizarre and different that I had to try to understand what they were saying; The Real World was filled with so many beautiful and promiscuous people that I needed to learn to be like them; hard rock and heavy metal were so bad-ass, that I wanted to be able to sing along to the songs and understand the master plan of our Lord Satan. The language became a means to imagining myself the way I wanted to be: my own version of a super hero.

It seems like every day a new study comes out arguing about the degree to which television viewing can impact child development (in both positive and negative ways). Here are some headlines on the subject from the BBC News website:

“Watching TV may speed up puberty”

As a child who grew up watching about 4 hours of television a day, I’m unsure as to whether I was just lucky or if I had enough other positive simuli in my life to keep television from turning me into a stupid, prematurely-pubescent, short-sighted fatso. Now that I’m a parent, however, I will try my darndest to set aside a few hours every night to make myself into my boys’ superhero, even if I’m totally boring and look ridiculous in spandex.