In Case of Emergency, Scream in Spanish

This may be just wishful thinking, but I see the following anecdote as a sign of how deeply rooted Spanish is in Gabriel’s brain: 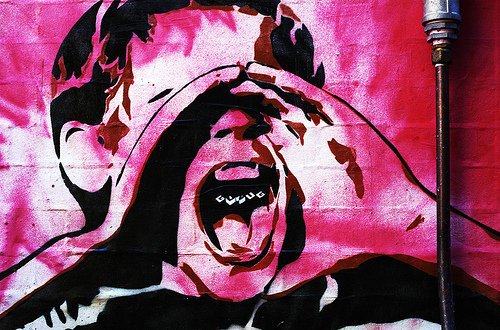 One recent night, after putting him to bed, I lumbered downstairs and started conjuring up idyllic images of my wife and me, placidly planting our derrieres on the couch to watch “I Love Money 2” or some such delightfully mindless trash. Fifteen or so minutes into our guilty pleasure, we began hearing faint whimpers coming from the baby monitor receiver in the living room. Very quickly, the whimpers turned into loud cries that alternated with words that were unintelligible to me.

Now, this is not an uncommon occurrence; my boy Gabriel some times goes on rants that last up to a minute only to peacefully go back, unaided, to dreaming about diggers and dump trucks. But this time, the pattern was clear and forceful and my wife, being the amazingly in-tune mother that she is, knew for sure that the boy wasn’t bluffing.

“Go upstairs,” she urged in a concerned tone. “I think something’s wrong.”

I reached for the remote in order to pause the TiVo (priorities!) and in a natural, unrehearsed dumb-ass tone asked: “What is he saying?”

“Mi pie?” said my wife, unsure about the meaning of the clamor.

“MY FOOT!” I said, springing for the stairs with agility uncharacteristic of someone who spends the better part of his life sitting in poor posture. The words in my boy’s desperate cry were Spanish for “my foot, my foot, my foot!”

When I got to Gabriel’s bedroom and turned on the light, I found his poor chubby foot stuck in the crib’s railing and his handsome sleepy face flushed and covered with tears.

The boy likes to rest one of his legs up on the railing while he sleeps and depending on the angle of the rest of his body, the foot might go into one of the spaces between the rails and lodge itself in there. And that’s exactly what happened.

I gently wiggled his foot out of the gap and tenderly rubbed it to allay his panic and my own guilt.

“Se te atrancó el pie en la cuna, nené?” [Did your foot get stuck in the crib, baby?], I asked, and the boy replied with a heartbreakingly sweet “Sí!¨ (or was his sweetness sarcastic and what he wanted to say was: “uh….no, I was  just practicing to become a contortionist toddler, old man!”…. nah, not yet…anyway…)

So in my post-crisis philosophizing, I was quite surprised and somewhat pleased that in a moment of high adrenaline, my boy’s brain fired up Spanish words to ask for help, and that gives me hope that as the predominantly English-speaking environment in which we live begins to displace and diminish his use of Spanish, at least there are some primal neurons permanently imprinted with good-ol’ Español that will always be there. On the flip side, I hope the memory of those torturous seconds of fruitlessly asking for help in Spanish gets erased by Thanksgiving.