Americans think it’s the funniest thing to mock-speak Spanish by just adding an “o” to the end of English words (e.g. “take me in your el truck-o to the next el town-o”). And guess what? My sons are Americans so it’s kind of naive to expect any different from them. It must be something in the water… Come to think of it, Colombians are just as bad — we add “ation” to the end of Spanish words to turn them into English ones (e.g. amigo (friend) = “amigation”) 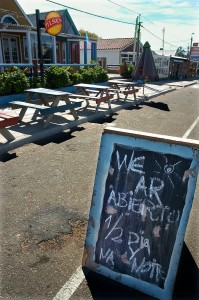 I’m kidding, of course. What I want to share is simply the dreaded reappearance of Spanglish in my boy Gabriel’s vernacular. In earlier posts I wrote about how very early on, when he was just beginning to speak, he was taking all kinds of linguistic liberties in creating hybrid words. But I had assumed that those days were behind us, especially considering how rigidly he seems to adhere to the language that he thinks he must speak with any given person. I was wrong.

Just the other night, I heard Gabriel crying very forcefully over the baby monitor so I went upstairs to see what was wrong. When I got to his bedroom, he was standing at the baby gate, still crying, and I asked him what happened. In a more subdued crying voice, he told me: “Droppó mi chupo” (“I dropped my pacifier”).

So, OK, the boy was tired so I gave him the benefit of the doubt. After all, just a couple of days earlier I got very short with my own mother (who doesn’t speak a lick of English) because I kept asking her in English to repeat something for me by saying “what? what? WHAT? WHAT?”, as the poor woman stared at me with a blank expression. But Gabriel was on a roll! In the couple of days that followed, he uttered sentences like:

– “Estoy tomando soupa” (I’m drinking soup)….though I think I’ll cut him some slack on this one since soup is “sopa” in Spanish, so it’s easy to get confused.

And what’s perplexing about the examples above is that he knows the Spanish words for all of those terms that he morphed into Spanglish.

I’ve read many articles that explain how multilingual children will inevitably mix the languages throughout their development and that the language they speak for the majority of their day naturally ends up being their dominant language. But can you blame an earnest father for making an effort to raise his boys as better than average Americanations? No way-o!