No Use for Dora the Explorer

Just to be clear, I think Dora and Diego are about the best thing that has happened to Hispanic people in this country since Ricky Martin made the entire nation shake its bon-bon the whole Summer of 1999. But it has been interesting to see where the concept of Dora and Diego fails when applied to the way I’m raising my sons. 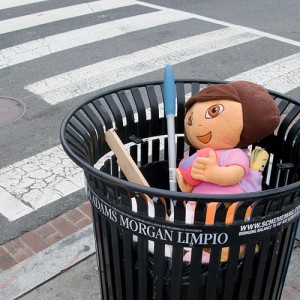 My older son now has a very clear idea of English and Spanish as two separate systems of communication used by two different groups of people, and he understands that some people can speak both (like, say, himself – duh!). But in order to secure the best chance that in the future he won’t all of a sudden want to start speaking to me in English,  I really harped on the fact that mama speaks English, papá speaks Spanish, so-and-so speaks this and that, and so on. What this created in the boy is a very strict sense of what each person he knows should speak and that’s why Dora doesn’t work for us anymore.

If you’re familiar with Dora and Diego, you know that they frequently intersperse Spanish words with their English dialog, and I couldn’t be any more pleased that the young, Anglo audience is not only loving and looking up to these beautiful, positive Hispanic role models, but that they’re also learning the language and the culture in the process. The Spanish versions of the Dora and Diego books do the inverse–they have mostly Spanish words with a few English words thrown in. And this is where my boy loses it (or simply gets annoyed and yells at me).

For instance, if we’re reading a Dora book where she is describing in Spanish how she and Boots are about to hop on a bus to go visit Diego at the animal rescue place and she excitedly exhorts: “Vámonos, Let’s Go!”, my boy will stop me on my tracks and yell: “No! mama says ‘let’s go!’“. You can do the math: 15 pages x 2 interspersed English words per page = 30 interruptions, and for each one, the boy will go through the effort of taking his pacifier out of his mouth just to set me straight.

So for now, Dora and Diego will have to indirectly benefit my boys in that the mainstream perception of Spanish-speaking, dark-featured kids is that they’re totally cool, adventurous, smart little people, and I’ll have to think about whether I’ve painted myself into a corner by laying out this rigid “we only speak Spanish to each other” dynamics. Otherwise I’ll never be able to be as cool as Diego, who is allowed to speak both.