How do you say? Ah yeah…

My boy Gabriel is making this whole raising him bilingual really easy on his Papá. I just don’t deserve the smooth ride that it’s been so far (ok, you know I’m fishing so feel free to post something like: “give yourself some credit, you clearly have worked hard”).

For the last couple of months, when he gets stuck on a word that he knows how to say in English but not in Spanish, he very gracefully pauses, thinks for a couple of seconds, and if the Spanish word cannot be retrieved from that beautiful brain of his, he’ll ask me how to say it in Spanish. 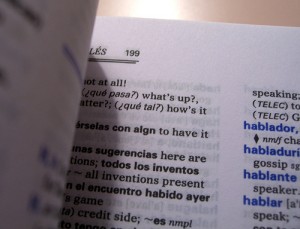 The first time this happened, it took me a few minutes to realize that I had struck gold. Why gold? Because if the boy feels that it’s OK to get stuck on a word and ask how to say it, my hope is that this will reduce any pressure he might feel to be as fluent in Spanish as he is in English and prevent him from going all Gringo on his old man and decide he’ll only speak English to me. At least for now. So even if our dialog is interrupted by the need to use Spanish words he doesn’t know or doesn’t remember, I make a big deal out of how fun it is to learn a new word and be able to say everything he wants to say in two languages!

This approach feels to me quite consistent with what I wrote in an earlier post about correcting in a playful way. It’s no secret that if you’re able to turn the action into some sort of game, you can get a young child to do unthinkable things, like brushing his teeth. So in that same spirit, I think the effort, concentration, and histrionics involved in making every “how do you say [word] in Spanish” an exercise in total awesomeness, is totally worth what you get in return: a child who is confident and comfortable with the language.

Now, the downside: Gabe is so comfortable asking how to say words in Spanish, that if he’s speaking with his mom and wants to relay something in the conversation to me, he will ask her (whose Spanish is limited) how to say certain words in Spanish. That’s where she needs to throw it right back at him and try: