Authenticity (or “Damn you, Fleet Foxes!“)

Am I a caucasian, middle class, liberal arts-educated, urban hipster? Definitely not (refer to previous post describing my upbringing in agrestic and anachronistic working-class Colombia)

Would my taste in everything indicate otherwise? Definitely yes.

Do I find it obnoxious and patronizing when people ask themselves rethorical questions and then answer them? You betcha.

Does that keep me from doing it? Hmm. 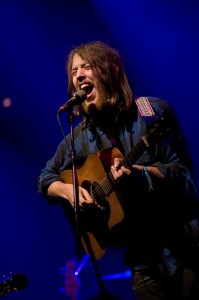 Music is important (indispensable, even) in my life and by extension (read: by imposition), in our family life. A random sampling of an afternoon soundtrack in our house could yield tunes by Elliot Smith, Andrés Cepeda, Depeche Mode, Silvio Rodríguez, Café Tacuba, Black Sabbath, Nirvana, The White Stripes, Helenita Vargas, Alci Acosta, Soda Stereo, Led Zeppelin, Pixies, Juanes, Juan Luis Guerra, Carlos Vives, Alí Farka Touré, and many others, in the span of an hour.

What does my iTunes library have to do with anything?

Well, since I’ve turned myself in to serve a life sentence in the wonderful prison that is instilling a sense of Colombianness in my children, I often struggle with my own sense of Colombianness–What does it mean to be Colombian? How do I live (and by way of example, teach my kids) “Colombianness.” Do I grow a luscious black mustache? Do I mix coffee into their formula? Do I learn to shake my hips like Shakira? (actually, I can already shake them just as well as she.)

It’s tough. For me, it’s a struggle between stereotype and authenticity.

One recent development that has brought this question to the fore is my obsession with Fleet Foxes. Not since I found The White Stripes had my faith in the possibilities of art and music been so quickly and intensely replenished. I wouldn’t be surprised if Facebook is about to ban me, thinking that it isn’t an actual person but some kind of spam-bot that’s posting so many Fleet Foxes videos and links to my profile.

But for all their mind-blowing wonderfulness and beyond-their-years musical depth and maturity, the Fleet Foxes are a bunch of white twenty-something Seattle boys singing in a style (and dealing with subjects) evokative of a Medieval, rural folk existence that their Scandinavian ancestors are much more likely than my own to have ever experienced.

So what happens when all that my boys listen to and see for two weeks straight is their old man belting out Fleet Foxes songs at home, in the car, while doing dishes, while sleeping, while going the bathroom…? And what happens when they see me dusting off my old guitar so I can start learning to play as much of the “Fleets” catalog as I possibly can with my own worn, Carpal Tunnel-Syndromed fingers? Do they start feeling like I might move the whole family to the boys’ maternal, Norther-European branch of the family tree?

That was my worry. But leave it to your children to teach you truth, to ground you in reality, to keep you authentic.

Just yesterday, as I was driving to the store with my boys, Fleet Foxes playing in the car stereo, my boy Gabriel says to me (100% in Spanish):

“Papá, he is screaming. He is telling him to come back home because it’s time to go to bed.”

And because I have my eyes on the road and my mind in the wintery meadows of medieval Norway (thanks to Fleet Foxes), I assumed we had just driven past some guy talking to his kid, and Gabriel was just adding dialogue to what he had just seen. So in a typical, dismissive and absent-minded parent kind of way, I said:

And my mind flies back to Norway…

But as the song kept playing on the stereo, I realized that Gabriel was picking up on the song’s lyrics:

♪♫ You should come back home, back on your own now…♪♫

So now, I’m re-engaged and Gabriel confirms that he too, is rocking out to the Foxes and conversing with me about it in Spanish. A couple of minutes later, when the song “Mykonos” starts playing, he says to me:

“Papá, that’s the song about the sun.”

[LYRICS: ♪♫ And you will go to Mykonos, with a vision of a gentle coast, and a sun to maybe dissipate, shadows of the mess you made…♪♫]

So what if the music is not in Spanish?

Should I ignore the fact that much of my “Colombian” childhood and teenage years were spent being in love with Lynda Carter as Wonder Woman? Or that I spent several months of my “Colombian” 1994 trying to find a cardigan sweater like the one Kurt Cobain wore to the MTV Unplugged show? Should I hide from them the fact that as a 16 year-old, I got creative in the kitchen, coming up with the perfect concoction of water and flavorless jell-o that would make my hair take the shape of Brandon Walsh’s hair from 90210. Should I stop asking rhetorical questions?

I wish I were a more laid back kind of parent who concerns himself only with ensuring his children don’t die by securing them food and shelter. That style was perfectly adequate for my parents’ generation and about a thousand generations before them. But alas, I’m from a generation that doesn’t trust its common sense and obsessively seeks validation and parenting cues from books or worse, blogs!

OK, lunch hour is over. The moral of this 12,000-word diatribe: Don’t try so hard. When your children see that you’re happy, they’ll join-in on the happiness. And then you can talk about it, in any language that feels true.