Anyone who has studied a foreign language knows that language is more than just words. I’m not talking about the cliché that X percent of communication is non verbal (although that’s very true.) I’m referring to what percentage of your being, of your “personality”, comes through in the things you say and how you say them. Lately, one of the things that brings me the most joy is to watch Gabriel interact in English with his mother and his maternal cousins, aunts, uncles, granddad, and nana. I feel like I’m watching another copy of my beloved son, created for the English-speaking world, being wonderful, clever, and delightful in new and different ways.

[Note of self-consciousness: the reader must understand that I adore my second boy Samuel just as much, but because this blog is about language and Samuel doesn’t yet speak, his appearances on the blog are limited.] 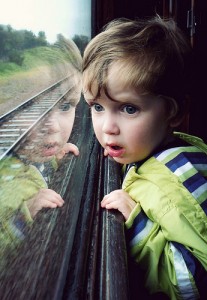 Likewise, I love and gush at the awe with which my wive’s family watches Gabriel and me speak in Spanish and I feel like they too are marveling at seeing the boy function in this wonderful, impenetrable world that they can only watch from afar. They probably feel like Louise Lane felt when she learned that Clark Kent can kick loads of ass when he puts on that red cape and lets a greasy black curl hang over his forehead.

And all of this has made me reflect on my own experience as a learner of English as a second language.

Humor is my trademark. I like to joke about the trivial and about the sacred. That’s just how I get through the day, how I relate to others, how I communicate. Humor is a very serious matter to me (I’m allowed one cliché per blog post.) So when I arrived in the USA in 1996, this wide-eyed, ambitious 20 year-old Colombian had one, and one fear only: that my adequate but still limited command of the English language was going to prevent me from really getting to know anybody and worse yet, it would prevent them from experiencing my sense of humor and getting to really know me!

There were times during my first few years in this country when I felt like I could never really feel at home here. I felt like I hadn’t connected deeply and personally with anyone who wasn’t from Latin America or Spain. And that feeling sporadically made me consider the idea of going back to Colombia. But in time, something clicked. When my subconscious somehow began to decipher the nuances of the English language, the variances of tone and rhythm, and when my vocabulary and level of comfort with the language grew and freed up brain power to dedicate to comedic timing, things changed, and drastically. I soon began to develop meaningful friendships with English speakers and I began to feel at home.

[OK, Ruben, we get it, you’re, like, the next Chomsky or something…now get to the point!]

The point is this: watching my boy Gabriel command two languages so easily and naturally, and anticipating that Samuel will be just as skilled, fills me with joy because I feel like I will love two boys, fourfold. And I feel like they have been given the keys to two worlds of human connection, learning, meaning…being. And that’s really cool. I know this, because that’s what happened to me. And now I have two homes in this world, both of which are full of beloved friends.