When You’re Strange (Faces Come Out of the Rain)

Being weird is cool and fashionable. By the way, I was into pretending I was weird waaaaay before it became cool. Is that weird? Good. The thing is: being stuck between cultures and languages will inevitably make you a bit weird or at least be perceived as such. 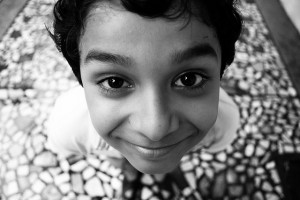 When I first arrived in the US, one of the several jobs I was hired to do despite lacking qualifications was as a daycare teacher (scary, I know). Such was the exuberance of the mid 90’s. So with my foot fresh off the boat and my English language skills just a notch above adequate, I was put in a position where I needed to exert the confidence and authority that I lacked as an immature individual just learning the cultural and linguistic subtleties of this new land. My interactions with the children I had to care for were often marred by confusion. Case in point: One day I was joshing with one of the girls and in the playful back and forth, she said to me: “You’re late, buster!”. I quickly admonished her with a firm “that is NOT OK!” and ended our game.  I spent the rest of the afternoon brooding over having earned so little respect from the kids that a little girl had called me a “bastard” (I had never heard the word “buster” before so obviously, the girl must have been some kind of spoiled American little brat).

I know, this blog isn’t about me, so I’ll fast forward to the post-Clinton era:

My boy Gabriel is a very talkative little guy and he loves wordplay in both English and Spanish. But with every new game, we have to go through the necessary adjustment of expectations and clarification of what works in one language and not the other.

The other day, after I put him to bed and told him I loved him, he replied: “Te amo dos” (“I love you two”). Confused, I remained silent for a few seconds, with a disoriented look on my face. “Te amo dos, te amo dos,” he kept saying, until it dawned on me that he expected me to do my part in increasing the number of the “I love yous” from “I love you two” to “I love you three” to “I love you four” and so on, but while that’s a game that he and I might enjoy, it just plain doesn’t work in Spanish (how do you increment “te amo también”?) and I have too much love for Cervantes, for math, and for my boy to try to make that work.

Recently, Gabriel has also become obsessed with rhyming. I believe this started as a game he and my wife played in the car by picking random words and thinking of words that rhyme with it. One day, Gabriel came up to me and said: “Papá – ‘casa…..ratón'”. OK. He reiterated: “Papá – ‘casa…..ratón'”. The mental strain became too much for my 80’s metal-fried brain, so I asked him what he meant. He explained to me that “casa” and “ratón” rhyme and after a few seconds of equally straining reverse-engineering, I figured out that he was telling me that “house” and “mouse” rhyme, after which I proceeded to congratulate him for figuring it out and tried to kindly point out to him that rhyming is not about meaning but about sound, so the words need to sound the same in Spanish also.

To the above, add my wife’s family and many of our non-Spanish-speaking friends looking at our boys befuddled when they don’t understand something the boys say and wondering whether they’re speaking Spanish or English, and you have yourself a beautiful family of weirdos. But what can be cooler than that?