A year and a half ago, a kind nurse placed in my arms a perfect little baby boy who looked uncannily like his older brother. Wiping off tears of joy, I thought: I am a blessed man and my wife’s and my genes appear to combine in one and one way only – we have unwittingly perfected human cloning. 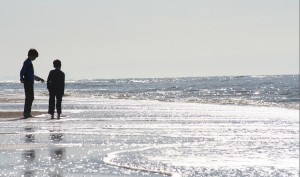 But it only took a few days for this newly minted magical creature named Samuel to begin showing evidence of his individuality: his body appeared to be leaner and longer than that of his brother’s, his eyes larger, his head smaller, his last name the same. Eighteen months later, we have in our home two young brothers whose personalities are each a universe of its own, regularly colliding around the living room. So it is with great pride and sense of wonder that I formally (and finally) introduce my boy Samuel to this blog, now as something beyond a passing reference to a cute, diapered squawking human creature who tumbles around, drooling in the background. In the last few weeks, Samuel has shown signs of a suddenly exploding vocabulary and we as a family enter a new phase of bilingual chaos that no amount of reading about the Flemish and the Walloons in Belgium can prepare us for. But I have already learned some lessons.

The first, cliched lesson: People are different. Gabriel went straight to saying “yes” and “no”, never nodding or even moving his head. Googling “infant stiff neck syndrome” turned up nothing so we didn’t worry. Samuel doesn’t yet speak the words “yes” and “no”, but he nods his head vigorously “yes” and “no” in response to various quotidian questions in both English and Spanish. Gabriel’s language development seemed to come early and develop steadily. Samuel’s seems to have come slightly later but the leaps and bounds feel more dramatic. Gabriel could not be made to say “avión” instead of “airplane”, Samuel cannot be made to say “water” instead of “agua”. And the list goes on. One way in which they’re identical is their early obsession with balls, playing with balls, and saying the word “ball” in English.

The second lesson: Apparently, I don’t control the universe, especially when I don’t even know how the universe works. Last year, I wrote a manic rant about my uncertainty around how my two boys will communicate with each other. Today, I’m even more uncertain, but find myself pleasantly surprised at seeing Gabriel address his brother in Spanish if I am the dominant parental figure in the interaction taking place, or in English if the dominant figure is my wife. Once Samuel moves beyond nodding and starts being more verbally interactive, who knows what will happen (theory: they’ll develop code words for ‘our parents really need to take a chill pill with this language thing’).

The third lesson: Samuel will not be irreparably damaged by not being the center of the universe. The frequent reader might glean from my early posts the degree to which my obsession with language acquisition led me to dedicating whole posts to dissecting Gabriel’s pronunciation of the word “poop” (I’m exaggerating). But heck, even on this current post I’m all like: “oh, they both say ‘ball’, oh my god, get out of town!” But believe it or not, I’ve cooled down quite a bit. Parenting two young boys leaves little time and energy for my former, obsessive charting and recording of my children’s language and overall brain development, and gives way to giving them room to just be. Sam, the poor, neglected, non-center of the universe one, is thriving and growing into a charismatic, outgoing, and crazy little boy, obsessed with books that portray skunks, and by virtue of simply being around parents and a brother that love him and speak to him, he can point tens of objects and animals in both English and Spanish in a book or around the house.

So stay tuned for this linguistic saga, at the center of which is me, grinning happy and exhausted, not knowing what hit me.