The frequent reader might find a recurring ball theme running through this blog – lots of ball analogies, several mentions of my boys saying the word “ball” only in English initially, not to mention the fact that three out of the four protagonists of these stories are male (the oldest being the most juvenile). And here I go again: Raising bilingual children is a serious juggling act; a joyous challenge of commitment and focus where I nervously try not to drop any balls. 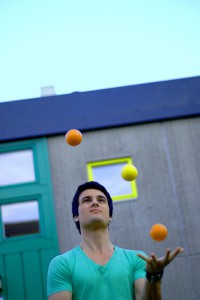 (Not me - I once was that young, though I never developed a square jaw) - Photo by Liam Kearney

Here’s the new ball I’ve been barely keeping in the air these days: In addition to feeling obligated to teach my children each and every one of the 88,431 words logged in Dictionary of the Royal Academy of the Spanish Language, plus the blue collar slang I grew up speaking, plus the Colombian equivalents of Mexican terms my kids hear from their teachers during the day, lately I’ve been  feeling compelled to teach Gabriel the English words for concepts that strike me as important. So we’ll be talking in Spanish about transcendental ideas like “honesty”, “friendship”, or “Netflix”, and immediately I feel like if I don’t teach him the equivalent words in English, the next time one of those notions comes up, he will have to go through unnecessary and redundant ramp-up with whomever is teaching him that concept in English.

I realize my new compulsion is a tremendous diservice to my boys, but as always, it is not my own will power or common sense that’s helping me break out of this bad habit. It is the children themselves who prove to me, time and time again, how little credit I give their beautiful little minds. Gabriel will start talking about the difference between right and wrong and all I have to do is allow him the occasional English word interspersed with his Spanish dialogue, and marvel at the fact that he obviously has learned things from Mama, Granddad, and the rest of his English-speaking family and is able to transfer that knowledge over to his Spanish vocabulary. Then all I have to do is point out that “robber” in Spanish is “ladrón”, and we’ve had ourselves a meaningful and didactic chat.

Add to the above the fact that if I keep teaching my boys words in English, I start to lose credibility and consistency as the Spanish-only parent. Nothing like fear to keep one’s spirit focused (ever heard of ” The Spanish Inquisition”?).

A few days ago, we were all sitting at the table eating lunch and Gabriel started to tell me about something his Mama had made him for breakfast earlier that week. Towards the end of his charming story, as he prepared to conclude with “that’s what Mama made me for…..”, I could see his eyes begin to wander and could hear him getting tongue-tied – he had forgotten the word “desayuno” (breakfast). After two or three failed attempts, he cleverly said “for the meal that I eat every day before school!”.

I laughed with joy and pride. Those are the moments when I feel like I can let those balls I’ve juggling fall on the ground and we can all just enjoy watching them roll.