It’s been months since my last blog entry. I’ve made many mental and electronic notes about our evolution as a young bilingual family and I hope that those notes will, one day in the not-so-distant future (i.e. 3/9/12), evolve into a coherent account of our learning and our happy evolution in the midst of the crazy experience that’s parenting. For now, I give you this anecdote, which might give you a sense of the current state of things: 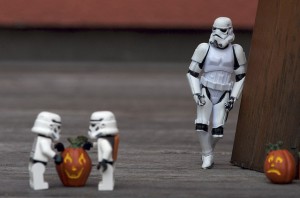 Last Saturday morning, I was in the bathroom looking in the mirror at my happiness-worn, leathery face when I heard my boys speaking with each other at the dinning room table in what sounded like Spanish. Trying to avoid spoiling such rare interaction (the boys speak to each other almost exclusively in English), I snuck out of the bathroom and into the kitchen (did I wash my hands?) intending to eavesdrop, but the boys mysteriously switched back to English.

A few minutes later, as I prepared to experiment with combinations of edible matter and concoct something that could be defended in a court of law as “breakfast for my kids”, I heard the boys speaking in Spanish again. I paused and listened for a few seconds and at some point in the conversation, I heard them addressing me (still in Spanish) and actually asking me a strange question; something along the lines of “Papá, where are you going?”. I walked to the dinning room and asked the boys what they were asking me. My son Gabriel answered:

“No, Papá, we are playing with Lego guys,” he said. “This one is you, this one is me, and this one is Sam. We were asking the Lego Papá where he was going!”

I laughed, caressed both my boys’ beautiful faces, and went back to the kitchen with a big stupid smile on my face, thinking: “I’ve got to make a note of this.”

If the boys are speaking to “Lego Papá” in Spanish, we’re doing something right…as long as Lego Papá doesn’t become their proxy Papá for everything else, because that would be just creepy and hugely concerning.

As for having abandoned my blog for months, like a ripe fruit that was left out in the sun? Let’s say my blog is a sun dried tomato. Or a raisin. Aged but still edible.