Feel the magic, hear the roar

In early 1987, an eleven-year old Colombian boy sat in a deep trance for sixty minutes, his consciousness overtaken by images of  sword-wielding anthropomorphous cats, until the boy’s vital signs impressively hovered just above flatline numbers without permanent damage to nerves or tissue. At the end of the sixty minutes, the boy slowly regained awareness of his surroundings; he stood up and kissed his surrogate father (the television set) and thanked him for introducing him to the incredible adventures of the Thundercats.

More than twenty-five years later, that boy would go on to write a blog post justifying parental laziness under the guise of proactive and resourceful bilingual parenting. 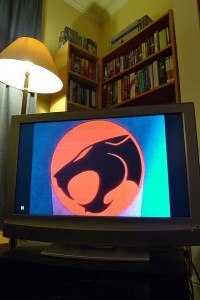 OK, I’m back. Had to take a quick YouTube detour in the middle of writing this to go catch another episode of the Thundercats on YouTube.

My wife and I pride ourselves on a house filled with love, play, books, togetherness, music, and conversation.  Television is a seldomly used appliance…that is, seldomly  used before 7:31 PM, but heavily used after we’ve read our boys their respective sets of books and put them to bed, so we can run back downstairs and go through our Tivo backlog of episodes of the various Real Housewives franchises and allow our brains to turn into silicone.

Like most well-meaning parents, we hold ourselves to a different standard than our children, but that’s exactly why (in all seriousness) mankind keeps getting better. And like most well-meaning parents, some days we’re fried and unable to muster the energy or patience to read books to equally tired children with their known propensity for emotional meltdowns that make a simple accident like dropping a paper bookmark on the floor worthy of a child’s kick to your stomach.

For me, as the “minority language” parent, this situation is particularly problematic because I have to make a concerted effort to compensate for an environment where English is the predominant language. So in addition to my natural desire to be an engaged and interactive parent, I have to find ways to enhance or magnify the language experience through any means I can: music, wordplay, ad-lib storytelling, some times to the point where my interactions with the boys become a bit forced and unnatural. And lately, since we’ve reached the milestone set by the American Academy of Pediatrics for TV watching, I have been resorting to my old surrogate father, the tube.

The rub in my situation is that I happen to have two boys who in addition to being sensitive and smart are, after all, quintessential boys, with their predilection for everything heroic, aggressive, muscular, explosive, and weapon-loaded. So sure, they’ll sit patiently through an episode of PBS’ “Super Why” or any other appropriate, educational program for children, but they sit there, quietly. But play them an episode of the Thundercats from YouTube (dubbed into crisp, clear, and proper Spanish, to boot!) and they will not only become invested in the show, but they’ll ask me questions and provide verbal reactions to every explosion, every chase, every sword fight, to the point that we get to hear only about 37.3 % of the dialogue. But that’s good enough for me.

The propensity to guilt of a recovering catholic is a chronic condition, but my guilt over resorting to television out of sheer exhaustion is allayed by seeing my kids discuss “pirámides” (pyramids), “momias” (mummies), “galaxias” (galaxies), “fortalezas” (forts) in our excited conversations about Lion-O and his gang of heroic cats.

I definitely don’t want my boys to have the same relationship with television that I had as a child, but I am grateful for the access we have today, at our fingertips, to good programs that meant so much to me as a child and that are beginning to mean so much to my boys. We are bonding personally and linguistically, and at least I’m sitting in the room with them, ready to turn the TV off and go outside with them to play with plastic swords as soon as the show is over.