And Then There Were Two

My young family was blessed in August with the arrival of our second son, Samuel. Since his arrival, there’s been nothing but happiness, joy, fun, and sleep-deprivation in our family, and both my wife and I walk around blissfully smirking in a state of deep contentment and sad dishevelment. 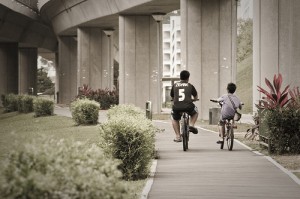 One of the many things that didn’t occur to me before Samuel arrived was a potential benefit of being a second child, beyond inheriting nicely broken-in shoes–Samuel will have a degree of exposure to Spanish language conversations at home that our first son Gabriel didn’t have.

So as I find myself holding Samuel in my arms while I converse with Gabriel in Spanish, I can’t help but hope that all those words that are being exchanged as he gleefully stares and coos, are imprinting in his brain a very strong basis for fluency in Spanish.

But why lean back and enjoy the prospects of an ever richer Spanish-speaking environment at home when I can start wondering and worrying about what’s going to happen 5 or 10 years from now? And the question that’s been plaguing me is: Is it too naive to think that there will be such a solid foundation in the Spanish language at home and such a firmly established habit in the boys of speaking Spanish with me (and dare I dream, to each other) that the surrounding, English-speaking environment won’t eventually turn them off to Spanish and cause them to rebel against their old man’s crazy mother tongue?

Of course, the sensible thing to do is to let them develop their language system organically and do what I can to ensure Spanish is always a part of their lives, even if that means they speak English to each other (or Spanglish as I’ve seen happen to other children in their situation) and the only time they speak Spanish is when they speak with me. But part of me thinks that, if I remain focused and turn on the charm big time (or bribe them), I could shape the dynamics of their relationship so that the natural thing for them will be to speak Spanish to each other. We’ll see. I better rest up for that battle.