No Spanish? No Shoes? No Problem!

I’ve often been frustrated by the limited selection of high-quality children’s books available in Spanish (though it’s possible I just haven’t looked hard enough). So in our house, the ratio of English to Spanish children’s books is at least a 3 to 1. 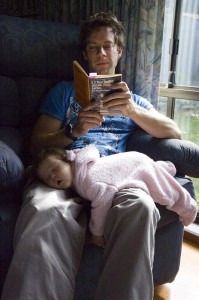 (not actually me or my child) Photo by Trynes

It’s gotten to the point that I’ve actually written a couple of books myself (as gifts to my kids) though come to think of it, those are probably of much lower quality than the ones we’ve bought. But that’s just my children’s Karma and who am I to intervene?

Anyway, given the limited number of books in Spanish we have, bedtime with Gabriel is interesting (Sam is still too young for bedtime stories.) We keep about 10 books in Spanish in his bedroom, but he tends to ask me to read the same four books every night. I figure: as long as I expand beyond the words on the page by asking him questions about the story and conversing about it, the benefit is equal to what we’d get if we had a wider selection of books.

But it’s gotten even more interesting recently because Gabriel is now grabbing books he knows are in English and asking me to read them to him in Spanish. Initially, I thought this was just his Colombian sneakiness coming to the surface (I’m kidding!) or some unique developmental quirk that is simply a reflection of his resourcefulness. But as it often is the case with parenting, you just have to ask a couple of people and you’ll find that there is nothing new under the sun. I found the following post by Carrie from Nashville, my distant, kindred blogger:

And come to think of it, what a great exercise for both the bilingual parent and the child to page through a familiar book and hear the same familiar story told in Spanish. Keeps my rotting, aging brain a bit sharper with the simultaneous translation, and allows the child to make connections between words, terms, and whole stories between the two systems.

Now, back to the link I referenced above, there are of course instances where this exercise proves hugely frustrating, mostly for the parent, because there are certain stories, certain terms, certain concepts that are not easily translatable into the other language. Heck, American children books are full of badgers, fawns, gophers, and prairie dogs, and as I struggle to search in my iPhone for the Spanish equivalents for those words, I’m tempted to fully convert the stories into Colombian tales about man-eating spiders and pet crocodiles.

But even if all you can do is give it your best shot and get as close as possible to the original story, you’ve accomplished:

2. Enhancing your child’s vocabulary (and your own)

3. Saving a few bucks by unexpectedly having added a new “Spanish book” to your library

Everybody wins and Papá can go watch The Bachelor right on time.