[Apologies for the failed attempt at cleverness with the title. I welcome suggestions]

Assuming things about people is a dangerous thing, but it’s human nature. I’m sure there is some evolutionary-psychological explanation for why we form opinions about people when we first look at them: group survival, territoriality, escaping potential mates going through midlife crises and carrying tons of emotional baggage, fear of commitment, and credit card debt.  And as much as I consider myself an open-minded person, I too assume things about people all the time and I don’t like it, because it diminishes my ability to learn and appreciate. 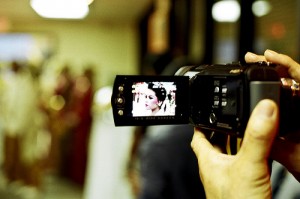 Because of this, I’m also careful to raise my children with as little exposure as possible to any racial, ethnic, political, social, sexual, gender, or comedic bias that may permeate through what I inadvertently say. So how in the world do you explain my 2.5 year-old boy Gabriel going around, daringly speaking Spanish to strangers, based (seemingly) on the way they look?

It hasn’t happend just once, twice, or three times. I’ve already lost count. We’ll be at the park (we live in a pretty diverse neighborhood with a nice mix of white, black, hispanic, east african, american indian, and asian people), and a “hispanic-looking” person will walk by and be stopped in their tracks by a very forceful “Hola!” from Gabriel.

Bear in mind that I have several Latin American friends who look “white” (not all of them are cute black-haired little things like me,) and at the bilingual daycare my sons go to there are white children who partake in the Spanish-speaking. So I would assume that my boy’s experience is that people of many colors may or may not speak Spanish.

The most interesting part of this phenomenon has been that, every time, Gabriel has been right. So invariably, he gets an enthusiastic “Hola, ¿Cómo estás?” back from the innocently-racially-profiled person.

This past weekend, Gabriel and I were walking around the lake looking for geese we could taunt, when a young girl with fair skin and long, light brown hair mostly hidden under her helmet, rode by us on her bike. Gabriel looked up at her and yelled “Hola!” to which the girl gave an “Hola!” right back as quickly and as naturally as if they were two neighborhood kids running into each other at a park in Bogotá.

So I thought: “Aha! Your spay-dar is not infallible, you little stinker. You just said “Hola” to an ‘Anglo’ girl who just happened to know the word ‘Hola'”

Four or five seconds later, someone called out to the girl, in Spanish, from down the road and when I looked in that direction, I saw a group of people who appeared to be her family and whom we later found (when they caught up with us on the trail) to be speaking in Spanish to one other.

Some people find my looks to be “generically ethnic,” so I have been told I look anything from unequivocally Colombian to possibly Mexican, Middle Eastern, Romanian Jewish, Spaniard from Andalucia, Italian, etc, etc, etc. Once, a guy spoke to me in Arabic and then got frustrated with me when I told him I didn’t speak the language! But I’ll have to assume that if Gabriel didn’t know me and saw me riding my bike in the park, he would think I look like a kind, handsome stranger and greet me effusively “Hola!”

I plan to vigilantly watch for his ‘spay-dar’ to fail so I can give him an impassioned speech on open-mindedness and tolerance. Or maybe I should learn from him instead and say what naturally comes to mind, make that human connection, and shrug it off if I was wrong, because all that matters is that I made somebody smile.

Note: No, we don’t taunt geese.